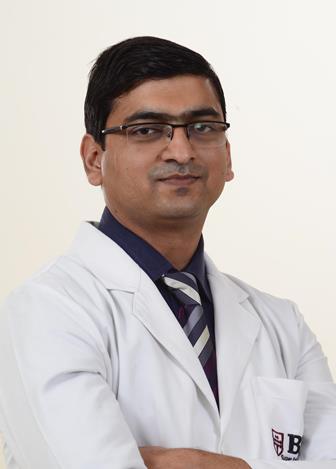 Dr. Ankur Garg graduated in the year 2002 from the prestigious Government Medical College, Aurangabad. During this period he bagged many accolades for his earnestness and aptitude. He then went on to do his Masters in General Surgery from LokmanyaTilak, Municipal Medical College, Mumbai, one of the foremost centres for medical education in the country. In the year 2004, he was awarded as the ‘Best Resident in General Surgery’ and subsequently in the year 2005, he was conferred upon the honor of ‘Best Trauma Resident in Surgery’ from the University of Mumbai. Thereafter, he successfully secured his Senior Residency with India’s pioneering Hospital for research and treatment in Liver & Biliary diseases – Institute of Liver & Biliary Sciences (ILBS), New Delhi. From the year 2008 through till 2013, he had a long association with ILBS, where he learnt an amalgamation of skills and academic structures in the field of HPB surgery and liver transplantation. In the year 2013, he successfully completed his super specialization- MCh HPB & Liver Transplant, from ILBS. His areas of interest include Living Donor liver transplant, Liver resections and Hepato-Biliary Oncosurgery.